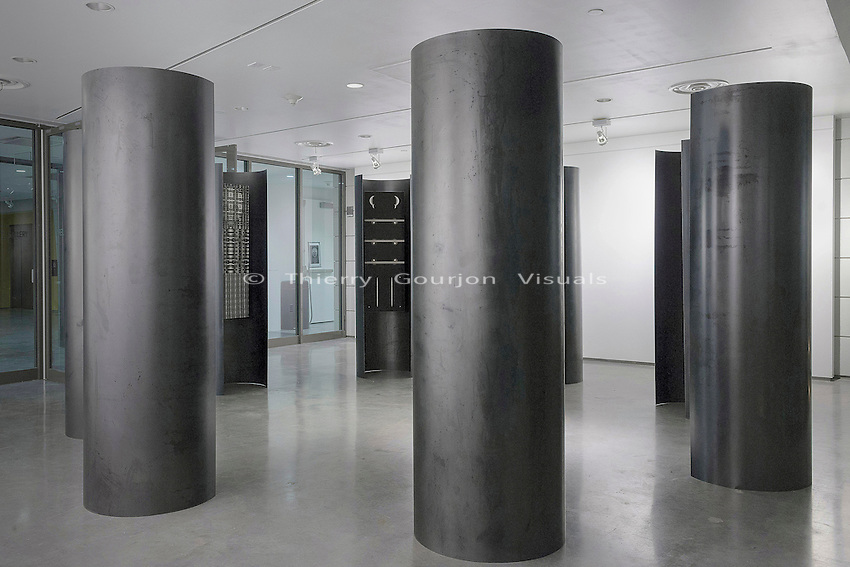 "Totems" is the sculptural extension of the "Fictional Universe" series.
Totems of the American northwest are akin to modern billboards, signposts or tombstones. Multi purpose sculptural pictographs, they recount familiar legends, clan lineages, or notable events. Some poles are erected to celebrate cultural beliefs, others are intended mostly as artistic presentations. Their design is the result of complex rules and customs that often vary for each Indian culture.
Eight totemic images are at the core of "Totems": imposing, three-dimensional narrative pictographs, acting as both beacons and sign posts. Some are the result of appropriated NASA photographs, manipulated into new composites, experimenting with patterns, grids and repetitions while playing with scale. Other images are entirely digitally created and reminiscent of those cosmic images. Finally, some are a combination of both techniques.
Seven foot vertical steel structures, tubular in shape and arranged in a circle, the shells each display an image (dye transfer on aluminum) at their center. The images are suspended vertically within the steel curve of the totem, arrested in mid air and facing the interior of the circle. As one walks into the room, a circular arrangement of steel monoliths meets the viewer. You must physically enter the circle to have access to the figurative part, allowing the arrangement to function as a portal, if only imaginary. While still rooted in the photographic tradition, the work is a direct result of the visual possibilities afforded by modern digital imaging.
© Thierry Gourjon. All rights reserved.